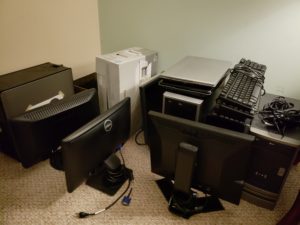 Computers need regular maintenance.  Hardware needs to be inspected for swollen capacitors which can be a sign of age or heat damage. Fan basins should be inspected and cleaned out on a regular basis.  Especially if there are cats and dogs in the house. Installed software needs to be evaluated to see if any infections have slipped through and temporary files and registry errors need to be cleaned up.  On-Site Louisville Computer Repair Co. offers an annual preventative computer service for your computer and we do break/fix repairs, as well. So, if you’re currently experience some problem or trying to avert disaster in the future, we would be happy to be discuss your concerns with you.

Computers create lots of heat.  In fact, I would argue this might be the single biggest culprit of computer hardware problems.  The motherboard and case architecture are both created to maximize airflow; however, often computer components don’t get enough airflow to stay cool enough.  Also actually room temperature really affects core computer temperatures.  Computers in hot rooms and under desks often do not get the airflow they need to stay cool.  Over time debris also built up in fans can cause the machine to overheat further.

Heat, dust and debris, heavy use or just normal wear and tear call cause your graphics card to fail. Some signs your graphics card is getting ready to fail are: funny, wavy action on screen, graphical artifacts (images that stay on the screen longer than they are supposed to), or even computer freezes when gaming can indicate graphics card stress or failure.


Computer Basics:  Understanding the Different Components of Your Computer

To many people the inside of a computer is a mystery. Many might know how to use a computer, but the inner workings seem to be complex and incomprehensible. Understanding the different components can help.

If you’ve even wondered what was going on inside your computer case:

Motherboard: This can be thought of as the control unit of your computer. In one way or another, all internal and external components connect to the motherboard. There are numerous manufacturers of motherboards, and they can be purchased with a variety of features.

CPU: The central processing unit contains the microprocessor and ultimately determines the performance of the software and hardware. The CPU is mounted on the motherboard. All other items being equal, a faster CPU results in a faster computer.

Cooling Devices: Several computer components are capable of generating heat. This heat must be removed to keep these components functioning properly. All computers have one or more fans, primarily to pull cool air through the case. The CPU also has a block of metal and copper on top called a heat sink. The heat sink pulls heat from the CPU. Some computers even have water-cooling! Water-cooling is usually reserved for gamers with high-end systems.

RAM: Random access memory is used as a buffer to hold information during processing by the CPU. Too little RAM can limit the ability of the CPU to work at maximum efficiency.

Graphics card: Some motherboards have on-board graphics, but it’s also common to have a graphics card that plugs into the motherboard. This card processes the complex graphics before sending them to the monitor.

Expansion slots: The motherboard typically has several expansion slots for various types of cards. There are a variety of cards that can be inserted into these slots. Graphics cards, network cards, and miscellaneous ports, to name a few.

Ports: These are places on the outside of the computer case for a plug to be inserted. You’re likely familiar with USB, Ethernet, video and audio ports.

Case: The case of a laptop includes the keyboard and the screen. In a desktop computer, the case is the box that’s separate from the monitor and keyboard.

Power supply: The power supply does exactly that; it provides power to the computer components. Many aftermarket desktop cases are sold without a power supply.